In cross-country, Jacob Brueckman was an athlete who showed steady improvement as he PR’d from his freshman to his senior year. He went from an 18:12 mark as a freshman to a 15:51 mark as a senior, which stands as his personal best for 5000m on grass. A two-time qualifier to the State Cross Country meet, Jacob qualified individually his junior year and finished his cross country season placing 79th at the State meet. His senior year, he saw individual, as well as team, success. A consistent scorer for Issaquah, he helped his team achieve a KingCo and District title for the first time since 2009; this was also the first Issaquah boys team to qualify to the State meet since 2009. At State, Jacob ran a course-best of 16:02 and placed 39th. His efforts helped the team place 5th at the meet in addition to setting the school record for 5k team average of 16:06.7. This was accomplished in one of the deepest years of Washington cross-country running.

Jacob’s true strength was on the track in the middle-distance events. He qualified for the KingCo Championships three years in a row in the 800m, from his sophomore to his senior year; he placed 3rd during his junior and senior years, subsequently qualifying for the District Championships for two years in a row. Jacob left Issaquah with a PR of 1:56.45, which is currently # 6 all-time. In his strongest event, the 1600m, Jacob 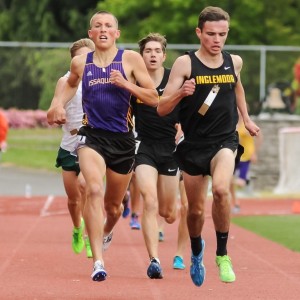 was a 2-time KingCo qualifier during his junior and senior years; he placed 7th and 2nd, respectively. He reached the epoch of his high school running career as a senior, when he recorded two top-three finishes at KingCo in the 800m and 1600m, qualified for the District meet in the 800m and 1600m, and qualified for the State Track and Field Championships in the 1600m as the first Issaquah boy to do so since 2004, where he finished 7th. His most notable achievements from his senior year were his 1600m PR of 4:15.00, which stands as # 4 all-time, and his record-breaking 800m relay split of 1:54.7, which anchored the Issaquah 4x800m team to a school-record-breaking time of 7:57.1.

Currently, Jacob runs for Colorado State University, which is a Division I program in the Mountain West athletic conference.