Jason is in his second season as co- head coach for track and in his third season over all. Jason has 17 years of coaching football at the high school level, the last 5 years in the Issaquah school district. Jason enjoys being part of the Issaquah community and culture as a 2nd year Track and Field Coach.

In her 38th season overall at IHS, Gwen is one of the most widely-recognized coaches in our state. Involved in coaching well over 1,000 XC/Track athletes of all abilities,  Gwen has been recognized multiple times as league Coach of the Year, was inducted into the Washington State Cross Country Coaches Hall of Fame in 2013 and most recently awarded USTFCCCA High School Washington State Coach of the Year. After retiring as head track coach in 2014, she’s happy helping where she can and continues as head coach for the XC team.

This will be Mike’s 5th year as our Pole Vault coach. Prior to this he was the Newport High School head track coach for 12 years. He specializes in the pole vault and has coached 2 different State pole vault champions. Mike was a vaulter and football player at Cascade High School in Everett. He has taught at Newport High School for 25 years and also served as head football coach. He and his wife Tanna live in the Issaquah community and have two kids that are IHS alumni.  “My goal is to make a positive difference in the lives around me.”

This is Jerry’s 4th year as an assistant co-throws coach at IHS. Jerry graduated from Hazen High School where he competed in Shot Put and Discus. Freshman year he joined the Track and Field team as a way to stay in shape for Football, but quickly fell in love with the athletic competition. Senior year he was a passenger in a car accident and the injuries ended his athletic career.

This will be Niall’s 4th season as a co-coach working with the IHS throwers. A former sprinter, he was a contributing member of championship track teams at South Kitsap High School and Eastern Washington University. When he isn’t completely absorbed in track and field, he is a husband, father and Systems Analyst for a wireless service provider.

After her first season as Issy XC head coach, Liza is back as a distance

coach for track.  She had an impressive running career, including being a part of a State Championship team at Eisenhower HS, running for UW XC and track, and racing at an NCAA XC Championship.  She also coached at Blanchet, IHS, and Speed Unlimited.  Liza was an Issaquah Elementary Teacher for 15 years, and is now Assistant Principal in Renton School District. 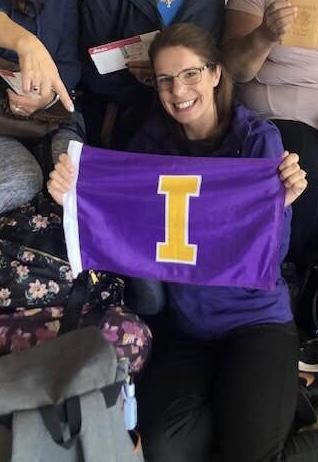 Katie is a second year sprints coach at IHS. She was an assistant coach for XC last season as well. She ran at Willamette University (NCAA) and is currently writing her dissertation about the positive impact of athletics on academics.

37th year of officiating and photographing Issy T&F and XC. He retired from the U of Washington’s School of Public Health seven years ago. He has also become a “master gardener” of cross country course trail maintenance.  Lawrie can be found at most meets carrying around a camera or two as our official team photographer. He is married to Gwen.

Ellie is a second year coach at IHS. She graduated from Johns Hopkins in 2019.  During her running career at JHU, she helped her team win two NCAA DIII National Championships and was an All-American in XC and track (5k, 10k). Before college, Ellie became passionate about XC/track while running for IHS.  She is currently applying for medical school and working as a medical scribe at Polyclinic Pediatrics.